Some people watch movies about their hometown or call home when they long to return home. Nick Hollister, a native of San Francisco, 3D-printed an enormous topographically accurate map to help him feel closer to his roots.

“Printing each tile, I got to know each neighborhood a little,” Hollister said.

Hollister was raised in the Western Addition along with his three siblings. He then moved to Providence, Rhode Island in June, where he designs toys for Hasbro.

It appears like a plaster cast but it’s actually printed using four spools made of white plastic filament, each measuring 2.5 kilometers in length.

It took approximately 720 hours to print the complete scale model of San Francisco, which was made up of 36 8-inch plastic tiles.

The filament is “extruded”—think of a hot glue gun—by an Ender-3 Pro 3D printer layer-by-layer, 0.2 millimeters at a time into 8-inch tiles. The tiles are then assembled into a jigsaw puzzle to form the 14-by-10-foot birds-eye-view San Francisco.

To create his 3D model, Hollister uses topographical data produced by LiDAR scans taken from December 2017 through April 2018 by the U.S. Geological Survey—available on OpenTopography, a public database of topographical scans.

The data is then ingested by 3D modeling software Blender to create files the printer can read, and then it’s just a matter of letting the roughly $200 printer do its job.

Hollister explained that one of the advantages of using this data was its accuracy. Because the maps are created using aerial topographical scans of San Francisco, Hollister feels it’s a more authentic form of re-creating San Francisco than painting or sketching a map would be.

Hollister claims that if he zoomed in sufficiently, he could create cars and people exactly the way they were at the moment.

“It’s interesting to hold the tile because it’s like a freeze frame of that moment in 2018,” Hollister said. “This is a more accurate portrayal of the city.”

Hollister stated that he misses San Francisco because of the many parks in the area where he grew-up, but also for the industrious energy that he believes San Franciscans radiate.

“The feeling of the city, it’s young. It’s something you don’t get in rural areas like where I went to school,” Hollister said. “Everybody’s doing something.”

Hollister has also 3D-printed a model of the Foggy Bottom neighborhood in Washington, D.C., the campus of his alma mater, Purdue University, and, earlier this year, a separate 3D map of some of San Francisco’s northern neighborhoods, including the Presidio, the Marina District and North Beach.

Hollister sold the digital 3D printer files for $20 to $30. However, he stopped selling them after becoming overwhelmed by 3D printing troubleshooting queries from customers.

He said he would likely sell other 3D-printed maps if time allows, but cautioned they are time-consuming and would be more expensive as a result, so it could be months before he is ready to set up shop—if he ever decides to do that.

“I haven’t arrived at an actual price,” Hollister said of making new model maps for customers.

Hollister stated that his current SF map maps are irreplaceable and not for sale. 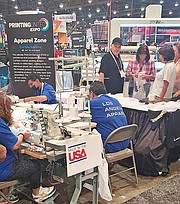