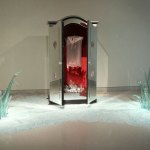 Photojournalism from the US-Mexico border currently emphasizes stark, divisive images: walls, fences, surveillance devices, border patrols, “coyotes,” and crossing migrants. Yet some of the most compelling artwork dealing with this region attests to several generations’ worth of cross-border familial relationships, personal identities that carry markers of both countries, and hybrid cultures that meld influences from the United States, Mexico, and farther south in Latin America. This complex artwork shows how border residents resist being defined and conflicted by the border. It focuses instead on a deterritorialized notion home and a sense that transcends gender politics and nationalism.

In Louis Carlos Bernal’s 1982 photograph Dos Cholas, Tucson, ArizonaTwo women are seen at a car rally near town in tight-fitting shirts, tight jeans and elaborately done hair and makeup. They are surrounded by a crowd of young women and men with pickups and their cars. Beyond them, you can see the outline of mountains at the desert horizon. Like many images that Bernal took of “cholos/as” (bicultural, working-class, Spanish-speaking individuals) throughout the Southwest in this period, the photograph reinForces the marginal status of many Mexican Americans, and the idea that their social gatherings occur in peripheral urban areas.

A Chicano artist and Arizona native with deep ties to the communities he recorded, Bernal (1941–1993) often said that his works were “made for the people I have photographed,” and that he hoped his images could make “some small contribution to my people—La Raza.” He knowingly opposed racist attitudes and the isolation from mainstream society that the Chicano barrio population experienced. His practice was structured, he said, around a politics of Mexican American self-representation, an approach fostered by his participation in the Chicano movement of the 1960s. In a 1983 exhibition brochure, Bernal wrote: “Chicanismo represents a new sense of pride, a new attitude and a new awareness. The Chicano artist cannot isolate himself from his community.”

Bernal was a networker throughout his 52-year-long life. He met with photographers in Mexico and the Southwest United States during this time, and he gained critical acclaim. His international fame meant that he kept a strong focus on his Latino/Chicano roots. He was born in Phoenix and received his MFA from Arizona State University. He also taught his entire career at Pima Community College, Tucson. Bernal loved to document families in their homes and at informal gatherings. To highlight his sitters’ culturally distinctive identities and intimate spaces, Bernal often used saturated colors.

The 1980s cholos/as style captured in Bernal’s photographs was heir to a longer tradition, particularly that of working-class Mexican American youths in El Paso and Los Angeles who, around the time of World War II, became known as pachucos, or zoot-suiters. In The Zoot Suit is for a woman (2009), cultural historian Catherine S. Ramírez argues that women zoot-suiters, or pachucas, resisted prevailing female identities, setting the stage for the transgressive fashions of later generations. Pachucas achieved this freedom through their adoption of the stylishly baggy male fashion—dress-up attire that was relatively expensive and impractical, unlike working-class clothes—as well as their brazen attitudes, their “bravado and swagger,” expressed in part through the use of group slang. Bernal showed later pachucas with more tailored wardrobes. They were important agents of resistance to heteronormative ideologies. Chicana muralist Judy Baca’s seminal work Las Tres Marías (1976) is a large-scale triptych that she painted herself as a woman-sized chola and tight-skirted pachuca. These images are flanked by a mirror, which allows viewers to see themselves in this spectrum.

Bernal’s pictures of cholos/as in the central Southwest were, in turn, a direct inspiration for Mexican photographer Graciela Iturbide’s images taken in Los Angeles and Tijuana a few years later. Both artists were working in roughly the same place at the exact same time. John Valadez, a well-known photographer, was also a Boyle Heights resident who lived and worked in Los Angeles.

Ronny Quevedo captured the transgressive nature of cholo/pachuco in a series works. He has outlined sewing patterns for this type of clothing in gold leaf on to muslin. The title of one piece in the series is pachuco, pacha, p’alante (2019), draws inspiration from the artist’s mother, a seamstress in the Bronx after the family migrated there from Ecuador. The intricately patterned fabric traces the template used to make a suit. The shining gold leaf adds a rich cultural meaning to the garment. It gives the ensemble’s building blocks a baroque glow. The patterns, which have inscribed measurements as well as dotted lines marking each piece, recall medieval illuminated manuscripts. The markings can also be used as a radical roadmap: p’alante of the title is a common activist slogan, translating as “onward.”

This association echoes Ramírez’s emphasis on the cholos/as’ and pachuco/as’ working-class origins—as though Quevedo imagined their idiosyncratic uniforms crafted from sheets of solid gold, rendering the wearers catalysts for political change. Mexican sociologist José Manuel Valenzuela Arce has argued that these youths mark the rise of a new kind of collective group identity, with a utopian sense of the future.

Photographing cholos/as is not the only thing you can do. Bernal documented the intimate interiors of the US-Mexico borderlands’ domestic and familial spaces. The Chicano movement portrayed the masculine-headed household as one where the husband is the head of the family. Bernal, however, often depicted a mother’s role in domestic governance. This was reflective of the realities of many blue-collar families. This artist helped to create new familial tropes and communities as well as collective memories.

A recurring theme in Bernal’s photographs is a female subject posing before a home altar. These small religious structures and the knowledge to make them have been brought to America by migrant workers from Latin America for decades. The syncretic practice—which first flourished in the state of Jalisco, Mexico, in the 16th century, initiated there by Franciscan missionaries from Spain—combines Catholic religious iconography, folk art, popular craft, and regional customs to create a place for private worship, where owners pray for miracles and give offerings. Traditionaly, altars were built by women from a household.

Amalia MesaBains used the form in the 1980s to make statements about Chicano resistance and hybrid identities. The iconic installation piece “The Invisible” is one of her most famous pieces. An Ofrenda for Dolores del Rio (1984), combine elements from the sacred traditions and Latino popular cultures: a Day of the Dead Skull with a frame picture of the eponymous actor, etc. Aesthetically, Mesa-Bains’s altars—and home altars in general—make use of embellishments that have often been dubbed “kitsch,” meaning vernacular, vulgar, inferior, or in poor taste. But Chicano author Tomás Ybarra-Frausto has designated such work Rasquachismo, expressive of a vibrant “view from below,” a working-class aesthetic that defies elitist taste. Mesa-Bains was directly involved in immigration in 2015 for her piece Emblems of the Decade – Borders. She uses photographs and furniture to recreate a home’s interior in this large-scale installation. This addresses the issue of displacement and familial separation, as well as the need to preserve a sense of domesticity even in temporary situations.

In Bernal’s photographs and Mesa-Bains’s sculptural installations, female protagonists regain control of their environment. Highlighting the use of ordinary, mass-produced materials and improvised domestic decor, both artists endow the familial spaces of the barrios with a sense of resilience and dignity, displaying what Mesa-Bains in her 2003 essay “Domesticana” called the ability “to hold life together with bits of string, old coffee cans, and broken mirrors in a dazzling gesture of aesthetic bravado.” The pride with which they display their handiwork identifies the inhabitants of the borderlands as cultural producers in their own right, and humanizes their experiences.

Bernal, a woman photographed in Tucson’s Barrio Anita, posed with her hands clasped in front of a small altar at home. The room was filled with religious imagery. There are multiple generations of family photos between the likenesses Christ and Virgin Mary. The modest furniture is mixed with carefully placed photos, a sign of how much space is used for decoration. The wall features a frame of the Last Supper, which is a common decoration in markets and stores throughout the Southwest and Latin America. This setting is typical of a borderland working-class home with kitssch ornaments, which are cheap and extremely common.

Meanwhile, Bernal’s artistry is subtly evident. The red walls impart an artificial atmosphere to the image; the Mickey Mouse balloon, hung from a bare bulb in the center of the room like a makeshift light fixture, adds to the image’s chromatic saturation. The concentration of objects in one corner of the room emphasizes the space’s cramped nature, as well as the woman’s resourcefulness in creating a meaningful display with limited resources. Bernal posed the homemaker before the arrangement, which highlights her role in challenging American cultural norms.

Family altars allow everyday women to share their lives in beautiful and significant ways. These matriarchs span racial and generational boundaries and serve as the guardians and keepers cultural and familial archives. Through Bernal and Mesa-Bains’s work, we become witness to the creative force of ordinary women, the results of which are hidden from the world inside their homes, reinforcing the notion that these borderland subjects belong there and the space is unquestionably theirs.

Eschewing the decorative abundance of the home altar, Laura Aguilar (1959–2018) was an LA-based Latina photographer who asserted control over her domestic space through incisive self-portraiture. In Sandy’s Room (1990) Aguilar reclines nude in a white room. The windows are opened to reveal a living wall with plant growth outside. Although the black-and-white scene includes only minimal objects—an electric fan, two stools, a chair—the work is consonant with the interior scenes discussed above. Aguilar can be found in relaxed repose, nude, and a cold drink in her hand. She is in control of her environment and her self-image. Elsewhere in her practice, concurrent with artists such as Ricardo Valverde, Harry Gamboa Jr., and Isabel Castro, she created portraits of chosen families—those networks of social kinship that lie beyond biological relationships. These images show how a family, community, or alternative domestic spaces could look.

These artists view the notion of the home and the family as a way for them to challenge conventional values and practice new values. They take cues from feminist and queer criticisms to subvert patriarchal oppression of the home. Furthermore, they highlight how traditional family structures take on different meanings when families are dispersed—an experience common to borderland immigrants—and creatively reimagine transnational social spaces. They challenge narrowly defined nationalist, gender and social constructs by doing so.

This article appears under the title “At Home in the Borderland” The November 2022 print issue Art in America, pp. 38-45.